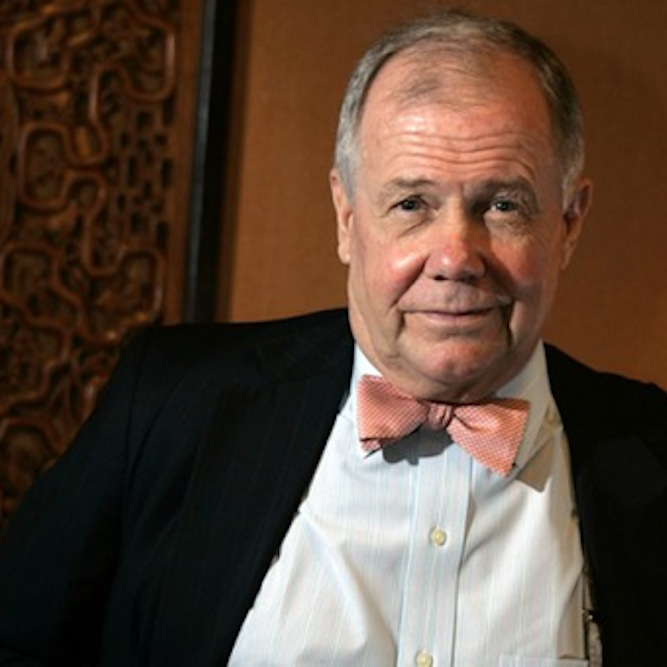 Jim Rogers, a native of Demopolis, Alabama, is an author, financial commentator, adventurer, and successful international investor. He has been frequently featured in Time, The Washington Post, The New York Times, Barron’s, Forbes, Fortune, The Wall Street Journal, The Financial Times, The Business Times, The Straits Times and many media outlets worldwide. He has also appeared as a regular commentator and columnist in various media and has been a professor at Columbia University.

After attending Yale and Oxford University, Rogers co-founded the Quantum Fund, a global-investment partnership. During the next 10 years, the portfolio gained 4200%, while the S&P rose less than 50%. Rogers then decided to retire – at age 37. Continuing to manage his own portfolio, Rogers kept busy serving as a full professor of finance at the Columbia University Graduate School of Business, and, in 1989 and 1990, as the moderator of WCBS; The Dreyfus
Roundtable; and FNN’s the Profit Motive with Jim Rogers.

In 1990-1992, Rogers fulfilled his lifelong dream: motorcycling 100,000 miles across six continents, a feat that landed him in the Guinness Book of World Records. As a private investor, he constantly analyzed the countries through which he traveled for investment ideas. He chronicled his one-of-a-kind journey in Investment Biker: On the Road with Jim Rogers. Jim also embarked on a Millennium Adventure in 1999. He traveled for 3 years on his round-the-world,
Guinness World Record journey. It was his 3 rd Guinness Record. Passing through 116 countries, he covered more than 245,000 kilometers, which he recounted in his book Adventure Capitalist: The Ultimate Road Trip. His book, Hot Commodities: How Anyone Can Invest Profitably In The World’s Best Market, was published in 2004. Another of his books A Bull in China describes his experiences in China as well as the changes and opportunities there. His recent book A Gift to My Children is a heartfelt, indispensable guide for his daughters (as well as for all adults and children) to find success and happiness. His latest memoir Street Smarts: Adventures on the Road and in the Markets was published in February 2013. Recently in January 2018, his book A Gift to My Children, 2nd edition which was published in Chinese, was launched in China. And in October 2018, another of his book The Next Big Wave, published in Complex Chinese, was launched in Taiwan. Rogers had two number one bestsellers in Japan namely The Future of Japan and A Warning to Japan that were published in January and July 2019 respectively.