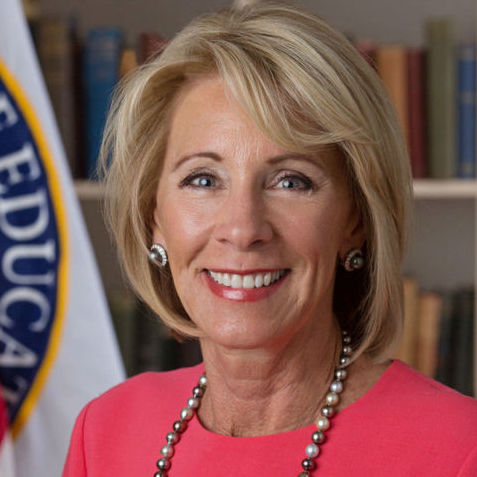 Betsy DeVos is a leader, an innovator, a disruptor, and a champion for freedom. She is the nation’s leading advocate for education freedom for students of all ages, having served as the 11th U.S. Secretary of Education from 2017-2021. For more than three decades, she has been tireless in her pursuit of public policy reforms that get government out of the way and allow all students the freedom, flexibility, resources and support they need to choose where, when and how they learn. Her advocacy has helped create new educational choices for K-12 students in more than 25 states and the District of Columbia and expanded post-high school education options for students and adult learners alike.

Betsy is also an accomplished business leader. She served as Chairman of The Windquest Group, a privately held investment and management firm based in Michigan. She is the former chair of the American Federation for Children, The Philanthropy Roundtable, and the Michigan Republican Party. Betsy is a graduate of Calvin College and is married to entrepreneur, philanthropist and community activist Dick DeVos. Together, they have four children and ten grandchildren.